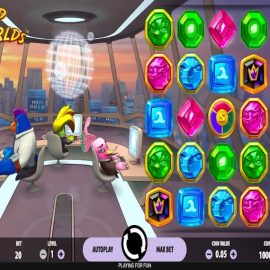 Wild Worlds is a 5 reel 5 row slot game with avalanches featuring Hero Wilds, a Random Destroye Feature and Free Spins that have their own Wild Features.

A winning line is formed when a horizontal or vertical line of 3 or more of the same symbols align. A single row or column can contain more than 1 win. During the game play, symbols fall into positions on the reels instead of spinning. When a win match or a winning line is formed an avalanche starts. The symbols in winning combinations explode and disappear, leaving space for a second avalanche of symbols for a a chance a greater wins. When there are no wins the avalanche stops.

During your game play if you form a winning combination with Hero Symbols these are destroyed and the remaining symbols of this type will turn to Wild Symbols. This transformation takes place before the next Avalanche. As in most of the slot games, Wild Symbols  substitute for all symbols except for scatter symbols. The great part is that you can even form a winning combination by landing 3 or more adjacent wild symbols vertically or horizontally.

The games destroy feature can assist you in a no-win situation. It can be randomly activated at any point where there is a no win situation during the main game. When activated only one color remains on the reels and all of the other symbols are destroyed. These are then replaced by a new Avalanche. Symbols that cannot be destroyed during this feature are Scatter Symbols.

When you land 3 or more Scatter symbols during the main game you activate 8 free spins which if lucky can bring you greater winnings. During free spins there are Heroes and Monsters present. Heroes in this game attack Monsters and it develops as follows:

Monsters, Captains and the Boss:

The game includes 2 types of Monsters. When a Monster reaches 0 health points it is destroyed. It Includes 3 Captains with each captain having 15 health points. For each captain destroyed, the free spins feature of the current free spins world is activated. This applies for when multiple captains are destroyed simultaneously as the feature is awarded the corresponding number of times. The boss in the game has 105 heath points and can be damanged only when all captains have been destroyed. The Heroes attack the boss against its separate weak spots. 2 of the Weak spots are worth 15 whilst 3 of them are worth 25 health points. Once the boss has been destroyed you are transferred into another Free spins world regardless of the remaining free spins. 8 New free spins will be received and as well a new set of Monsters. If the boss is again defeated, then you are transferred similarly to a new world and received 8 free spins. It is a game that can provide great chances a great prizes if you lucky. It has quite many