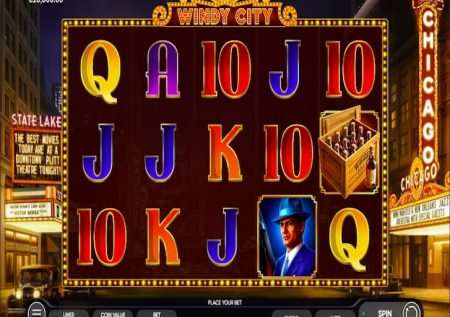 Windy City is a 5-reel, 3-row with 10 lines slot game, featuring Wild symbols, free spins and also a risk game feature. The game can be perfectly played on any device including mobiles and has an RTP of 96%. Playing the game you will step in to the wild city of Chicago during the roaring 1930s. Otherwise called Windy city, Chicago at that time was filled with fierce competition between gangsters.

Whilst spinning the reels you will get to know the Mafia Boss Don which is the game’s Wild symbol. Landing the wild symbol on the reels, it will substitute for other game symbols and assist you in forming winnings combinations. Well all symbols except for the scatter symbol which is depicted by the Boss’s car.

At any time you have winnings from the reels, the game gives you the chance to double your winnings in a risk game. Any moment when you get a win on the slot games paylines you can click the cash sign to enter the risk game. During the risk game you battle against the dealer as you have to select 1 card our of the 4 that are on the ground. Your card would need to be higher than the dealers card and your aim is to win. Shall you get a stronger card, then you win and your winnings are double which for you is grant. And you can continue doubling winnings up to 10 times.

If you are wondering about the game’s return to player (RTP) percentage then you will find a decent percentage. The game’s RTP is fixed on 96% which is above the 95% industry average and which allows us to give it another plus.