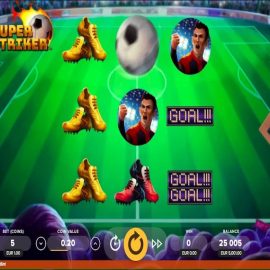 Super Striker is a 3-reel, 3-row with 5 lines slot game that features a Golden Multiplier and Free spins For football fans this football themed release could provide a thrilling experience. It has free spins, a Golden Multiplier feature and features also the bet slip concept that was first launched with Scudamores super states. The latter is great in that it seeks to re-create the anticipation of betting on live football matches.

Whilst spinning the reels, if you land the Golden Scatter anywhere on the reels during the main game, you are awarded with a random win equal to 10 or 20 times your bet. And the best part is that the Golden Multiplier can be triggered on the free spins game as well which makes the game quite interesting.

When during the base game, you land 3 Scatter symbols or 1 Golden Scatter and 2 football scatter symbols, you are awarded with free spins which can make the game really exciting. The game’s free spins game comes with 5 different levels with an increasing multiplier.