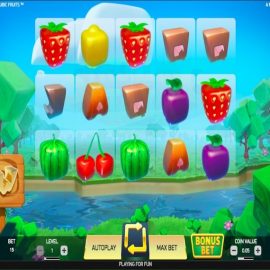 During your gameplay any symbols can appear as normal symbols or as a 2×3 or33x3 Colossal Symbol. These can appear anywhere on the reels both in the main game and in Strolling Staxx Re-Spins. Once a Colossal symbol lands on the reels, the symbols splits to create 2 up to 9 same symbols on the covered positions. This gets better with the Staxx Re-Spins feature that gives more chances at greater fortunes.

Strolling Staxx Re-Spins are activated when one or more reels are covered with the same symbol, creating a stack of symbols. The Staxx sign on the left of the reels shows the symbol that can land to cover an entire reel in each spin. The great part of this is that during the Strolling Staxx Re-spins all stack symbols and connected symbols move to the left on each spin until they disappear from the leftmost reel. More stacks of symbols can appear on the reels during the Re-spins which means that Re-Spins are re-activated giving more chances in greater winnings. The games gets more exciting with the bonus bet & Extra Chance Feature.

The Extra Chance feature is activated when Strolling Staxx Re-Spins are activated by not having landed a 3X3 Colossal Symbol. During the feature, you have a chance again to land an overlay 3X3 overlay Colossal symbol which can partially or fully land on the reels. So if you missed your chance to land a Colossal Symbol and trigger Strolling Staxx Re-Spins you still have another chance to trigger the feature for greater wins. So if you ready to find your luck, you can play Strolling Staxx slot game on any of the casinos listed here.