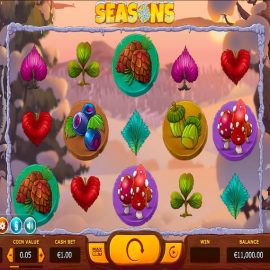 The game encompasses Wild substitutions which as its usual on slot games can substitute for symbols, allowing more chances to form winning combinations. It also features 4 game modes with each having its own wild symbols and the more you land during the game modes, your winnings can be multiplied.

As previously mentioned, the game encompasses four game modes with each housing its own unique wild symbol. The following are the game modes that you can play on the game. After 10 spins have been played in each season, the season can change to a new game mode. Winter Season: The Winter seasons features a Hare Wild symbols, which when it lands on the reels will duplicate itself to another position. The position itself is chosen in order to vive the best possible win out of all positions. Spring Season: During the Spring season you can land Owl Wilds which would also give you a free re-spin. When the re-spin spins, the owl symbol will move one step in a straight or diagonal direction randomly chosen. If the Owl moves to a position outside the game area, then the Owl disappears. Summer Season: The summer season encompasses the Deer Wild which function is to expact in a CROSS pattern when it lands on the reels. This means that when it lands it will add one wild above, one wild below, one wild to the left and one wild to the right of the deer Wild when possible. More chances are given to form winning combinations. Autumn Season: During the Autumn season game, you can land Fox Wild symbols which one it lands will award you a randomly chosen multiplier. This is by extend applied to all wins in the spins. The more wilds you have landed the more possible multipliers are given. Below you will also find the multipliers attached to the number of Wilds during the Autumn season: 1 Wild gives a multiplier of 2, 3, 4 or 5 2 Wilds give a multiplier 3, 4, 5 or 6 3 Wilds give a multiplier of 4, 5, 6 or 7 4 Wilds give a multiplier of 5, 6, 7 or 8 5 Wilds give a multiplier of 7, 8, 9 or 10 Quite an abundance of chances is given in this listed game. But also an abundance of chances to up your winnings. If you wish to give this marvellous game a spin, you can try the game by clicking play now.