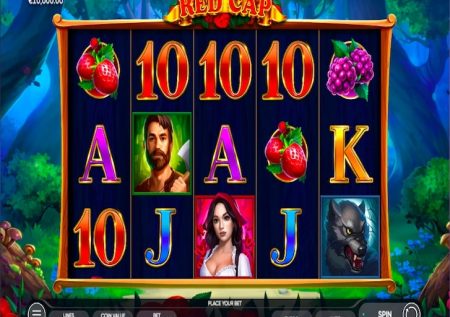 Red cap is a 5-reel, 3-row slot with 20 paylines slot game, featuring wild substitutions, free spins and a risk game. This slot game is themed around a mysterious forest and the story of red cap which is trying escape from the big bad wolf. All the game symbols are themed around the story, including the big bad wolf, a brave huntsman, berries and the red cap’s grandma.

Spinning the reels of this mysterious slot you can land wilds which are depicted by the red cap. The red cap can substitute for other game symbols – excluding scatter symbol – and will assist you in forming winning combinations that will contribute to your bankroll. The game’s Wild is also special during the game’s free spins which we will revisit on the next section as it has the potential to be a lucrative symbol.

If you are a risk taker, then the game has you also covered in that it gives you the chance to risk your winnings for a chance to double them. Every time a winning combination is formed, you can click on therisk game feature in which point you will need to choose a card and beat the dealer’s cards. If you manage to beat the dealer, then your winnings are doubled and the doubling can take place 10 times.  So if you are a risk taker by nature, you can try your luck at doubling your rewards from a winning combination at anytime.

If you are wondering about the game’s return to player (RTP) percentage then you will find a decent percentage. . The game’s RTP is fixed on 96% which is above the 95% industry average and which is pretty nice to see.