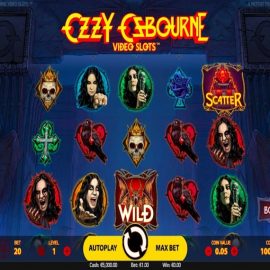 The game’s wild feature is depicted by a bat which ones it lands on the reels it will assist you in forming winning combinations. It will substitute for all the game’s regular symbols allowing you to increase your bank roll. The cherry on top  the Ozzy Osbourne slot game Wild symbol, can appear anywhere on the reels during the main game, re-spin and free spins. No restriction at all on which game a wild can appear.

At any time that you are spinning the reels, you will notice on the right corner a bonus bet button. By selecting the bonus bet button the game is suddenly played with 40 coins pet bet which brings you more gifts. With the bonus bet activated, you can get more free spins activated and multipliers in free spins increase from the usual x2 and x3 to a fantastic x5 and x7. Already this game offers a great deal that you can look forward to. But there is a lot more entertainment on this specific game as you will notice further on.

When you land 2 scatter symbols on reels 1, 3 or 5 you are instantly awarded with a re-spin giving you a chance to form another winning combination. But something fantastic happens before the re-spin starts. Prior to the re-spin the games symbol charge up is activated and the symbol spinner defines the symbol being awarded for the re-spin. Next the feature spinner, defines the feature that is applied to the chosen symbol. Shall a scatter symbol appear on the symbol spinner in the re-spin, the bat head will appear on the feature spinner and free spins are activated after the re-spin round. Quite a complex function that the game comes with but it surely can entertain you whilst spinning the reels.

Whilst spinning the reels on the main game you also have the chance to activate free spins to help in your rocking journey for rewards. Land 3 scatter symbols on reels 1, 3 and 5 and you are instantly awarded with free spins that can give you a chance to increase your winnings. 4 free spins are activated when playing with the base bet but you get 5 free spins if you are playing with the bonus bet activated. Once the free spins have been activated, the game’s symbol spinner appears which defines the symbol that is awarded until the end of the free spins. Next the feature spinner will define the feature that is applied to this chosen symbol until again the end of free spins. Rocking fun all the way so far!

It is quite a complex game with a lot of feature but nonetheless once you give it couple spins it is quite easy to follow. Might be a good idea to play some spins on demo mode so that you get the hang of it. But it is a really promising game. The wild symbol can appear on any of the games –either base game of free spins. Not a function that you notice on many games to be honest. On top the game includes re-spins and free spins which are accompanied with special features such as coin win, wild feature, symbol multiplier and upgrade feature. A complex game with various features but which seems to offer great chances to extend your gaming experience and be highly rewarded if luck strikes.