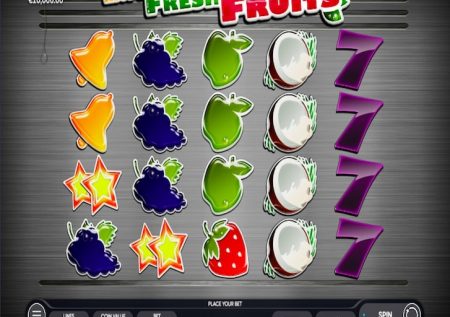 Fresh Fruits is a 5 reel , 3 row and 40 lines fruit slot game featuring Wild Substitutions, Scatters and a Risk game that can double your winnings. It is a sequel to the fresh fruit game but this time reels spin with a brushed steel background. Whether you are a fan of classic fruit slot games or of modern slot games, this game will surely provide a great gaming experience with its classic style and modern graphics. Once you load the game you will notice all the classic fruit symbols on the reels such as coconuts, apples, watermelons, grapes, strawberries, 7s, Bells and Stars . Coupled with the classic feel and modern graphics the game comes with some great features.