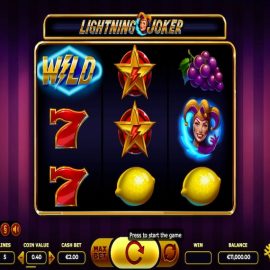 Lightning joker is a 3×3 with 5 lines slot game featuring rapid re-spin, multiplier strike and mystery win feature.The game can be perfectly played on any device including mobiles and has an RTP of 96.3% A simple classical slot game in which a lightning ca strike to increase your winnings. The game’s lucky lady joke also comes with mystery powers which can trigger multiplying powers.

Whilst spinning the reels, if you fill any 2 reels with identical symbols you trigger a respin of the non-matching and non-wild symbols. The cool part is that wild symbols can substitute for any regular symbol in the matchin reels and still trigger the respin. This increases the chance of triggering the respin but Wild symbols cannot land on respins.

When all 3 reels are filled with identical symbols, you trigger a multiplier which can boost your winnings sky high. The possible multipliers that you can be awarded with include x2, 3x, x5 or x10.

Multipliers are nice to get and there is yet another to get even higher multipliers that can boost your winnings even further. Landing 2 or more Joker symbols anywhere on the reels can bring you multipliers starting from x2 up to x10000.

If you are wondering about the game’s return to player (RTP) percentage then you will find a decent percentage. The game’s RTP is fixed on 96.3% which is above the 95% industry average and which allows us to give it another plus.