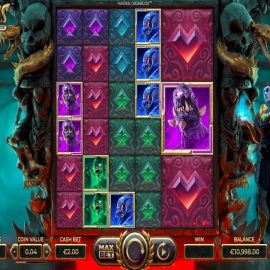 Hades gigablox is a 6×6 with 50 paylines slot game, featuring gigablox, wild hunt and free spins with multipliers that can boost your bankroll. Themed around Hades and his underworld this hades gigablox comes packing with the famous gigablox feature and much more. Read further the Hades gigablox slot game review to find out more about the game.

Whilst spinning the reels of the game, you get the chance to experience Yggdrasil’s gigablox feature. Basically, you can land what are known as gigablox, which are oversized symbols in a 2×2 to 6×6 formation. This means that there are more chances for you to form winning combinations, due to the space that they take and which will allow matching symbols to form a winning combination. But the fun does not stop here on this underworld themed slot game as more rewards can be won through the free spins feature and its multipliers. Read further the hades gigablox slot game review to find out more

Entering the free spins mode on the hades gigablox game, you will experience the games multiplier counter. When you win fights with the Hades feature, it increases the multiplier which will multiply potential wins. This progresses as follows:

As you understand from reading the hades gigablox slot game review, the fun starts when enter the free spins round. If you are lucky, you can even derive quite great rewards from it through the multiplier. The main game is also interesting especially with the gigablox feature which can reward you quite good even prior to the free spins. But the free spins seem to be the one bringing the action.

If you are wondering about the game’s return to player (RTP) percentage then you you will find a descent RTP which is set on 96%. The game’s RTP is fixed on 96% which is above the 95% industry average which is a plus from us.

Hades gigablox slot game, has a rather simple main game and all the fun seems to be mainly pushed for once you trigger the free spins. Though it has a rather plain main game, the gigabox feature greatly assists to bring about some descent rewards which can extent the game play till the free spins are triggered. The free spins feature also the gigablox and musth more which is quite a delight to spin with. The game’s free spins can prove to be quite lucrative with all the features that triggered during the spins. This is especially the case, when you win fights with hades and get the multiplier increasing. And the cool part is that every time the multiplier increases, you also get another extra 2 free spins which can potentially boost your winnings.