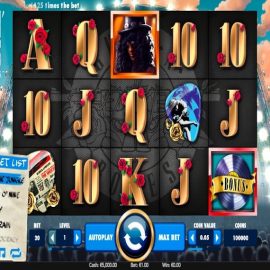 Wilds can appear anywhere on the reels apart from on reel 3 in the Apetite for Destruction wild feature and all symbols except from bonus symbols can be substituted. Expanding wild symbols substitute in turn for all symbols unless its the Apetite for Destruction Wild, Overlay Wild, Legend Spins and the Overlay stacked wild in encore free spins. During the main game 3 features can be randomly activated, legend spins, the apetite for destruction wild and solo multiplier.

When 3 bonus symbols appear anywhere on reel 1, 3 or 5 during the main game the game will award one of 3 bonus features. Encore Free spins Crowd pleaser bonus or a coin win.