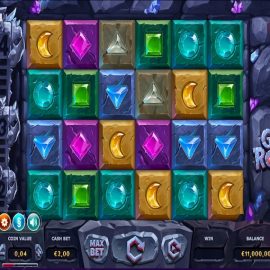 Gem Rocks is a 6 reel, 4 row with 4096 ways to win slot game featuring drop down wins and a Gem Rock feature which awards a Monster Rock increasing chances to form winning combinations.

During your game play when 2, 5 and 9 consecutive drop down wins are formed – as it is also indicated by the Gem Rock Meter on the left – will trigger the Gem Rock feature. The feature amazingly awards a single Monster Rock which lads on rop of the reels and is made from Identical symbols. This will give you amble room to form more winning combinations and look forward to greater rewards. Shall you wish to try this game for real, you can do so by clicking play now.