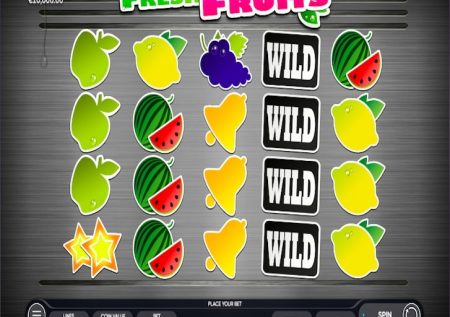 Fresh Fruits is a 5 reel , 3 row and 40 lines fruit slot game featuring Wild Substitutions, Scatters and a Risk game that can double your winnings. If you are a fan classic fruit slots this game will surely entertain you with its classic style and its modern graphics Once you load the game you will notice all the classic symbols on the reels such as lemons, apples, grapes, watermelons, coconuts and strawberries. Coupled with the classic feel and symbols the game comes with some great features.

During your game play, you can also land a wild symbol on the reels. The wild symbol  on the game substitutes for all symbols except the Star symbols which is the games scatter. The wild symbols substitutes when a winning pay line is formed giving you more chances at winning. This is made even better with a scatter symbol that does not require a payline to be formed in order to win. Fresh Fruits Scatter Feature: The games scatter symbol is depicted by a star. Landing a scatter symbol on the reels which is depicted by a star, does not require a pay line to be formed.  And landing 3 or more scatter symbols anywhere on the reels can bring you winnings. In case you are willing to take a risk you can also even double your winnings by paying on the games Risk game Feature.