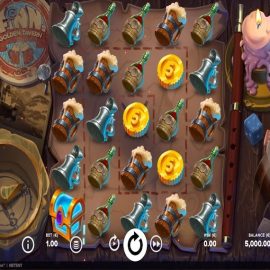 This fantastic slot game features a spin mechanic in which there are 25 spaces with 25 separate symbols which swirl like a whirlpool. In this whirl winning combinations are formed when 3 matching symbols appear vertically or horizontally on the game. A slightly unusual mechanic from common slot games in which pay-lines would allow you to form winning combinations diatonically and otherwise.

Finn’s Golden Tavern also houses a Wild symbol which can substitute for symbols and help you form winning combinations. On this game these would appear as part of a line either horizontally or vertically.

After all the winning combinations and avalanches have been accounted for, the game might also trigger a Random Coin feature. This can bring about the conversion of two low paying symbols that will be changed to a coin symbol in which case the value is randomly chosen. But it is better as this can increase even further your winnings.

The cool part about Finn’s Golden Tavern is that it also includes free spins that you can play to boost up your bank roll. You can trigger the free spins round if you are lucky and the Chest symbols appears in the center position. In this case you are awarded with 5 free spins. On top during the game’s free spins round you also get a multiplier meter which can increase further your win payout. The multiplier increases one step up for each Wild that is generated during avalanches so the more winning combinations you form the more you can payout.

As a cherry on top, the game also provides you with help during the main game when no winning combination is formed. The fist slam in this case can be randomly activated in which case a coin symbol is moved allowing you to to form a winning combinations.