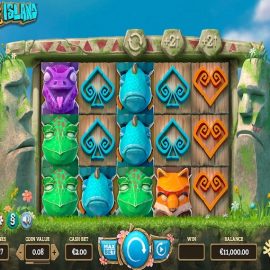 During your game play you can land Wild symbols on reels 2 or 4 which can substitute for symbols, allowing you more chances to form winning combinations. On every wining spin the game also allows you another chance in a feature called symbol swap re-spin.

Whilst spinning, every winning spin in the base game triggers a re-spin giving you another chance to form a winning combination. When a re-spin is trigger it always awards the symbol swap feature increasing the potential win in the following explained way.

But the game also features another spectacular feature – Expanding Reels, which during the symbol swap re-spin will bring more rewards.

During the symbol swap re-spin you can trigger the games expanding reels feature which can allow you to land more symbols and form more winning combinations. The reels expand in the following way, making it a feature to look for.

The more the pay lines increase, the more the chances to form winning combinations and be handsomely awarded. But that’s not all as can be boosted with the games expanding wilds feature.

When during your game play you land Wild symbols on winning spins the wild symbols will expanding to cover the entire reel. When you land wild symbols during the base game that form winning combinations are sticky for the symbols swap re-spin and these also expand to cover the reel. More chances are given to form winning combinations at each step of the game. The expanding wild feature being effective even on the re-spin game and the symbol swap feature  can be a real bank roll booster if you lucky. If you wish to try the game for real, you can do so by clicking play now.