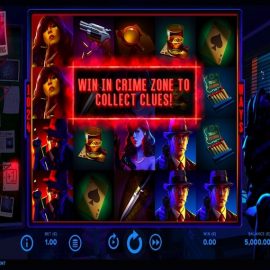 Cash Noire is a 5-reel, 4-row with 1024 ways to win slot game, featuring the avalanche feature, mystery symbol, a crime zone and free spins with a multiplier. A slot game themed around the criminal underworld which is set to take you on a journey to solve the case of the curious green  ace. Set in the crime ridden streets of San Cayetano solving the cases of the curious Green Ace will result in big rewards.

Whenever you form a winning bet way it starts an Avalanche in which case winning combinations are removed from the reels and more symbols fall into the empty spots. Avalanches continue within the same spin until there are no more wins giving you the chance to form more winning bet ways from a single spin. Nice part of this is that Avalanches during free spins are paid and multiplied by a multiplier.

If during a spin or an avalanche there are no wins on the reels, the mystery symbol transforms into a random regular symbol.  Only one mystery symbol may land on the reels during a spin or an avalanche each time this feature is activated. And if the symbols lands outside the crime zone which highlights the symbols on the reels, it will reveal a random symbol from the paytable. If though it lands on the crime zone, it will clone itself throughout all the spots of the pattern revealing a random symbol from the paytable.

So based on the progress in regards of the clues activated you will know when you will receive the game’s free spins to play with.

If you are lucky and manage to trigger the game’s free spins, you get to play with some of the game’s popular features such as the Crime Zone. The crime zone covers 5 spots and is active throughout the free spins. During the free spins you are also displayed a City Chase Map which also displays a meter showing the positions in which the multiplier progresses and the extra free spins are awarded. The multiplier on the right side of the play area will show the current multiplier for all your wins and starts from a value of X1 up to X10. The multiplier grows in increments of 1 every 7 locations when reaching the 7th location, your winnings are multiplied by 2X from the next spin. When reaching the final location on the city chase map, the case is closed. The multiplier stops at X10 and you are awarded the last 3 extra free spins in the current free spins cycle.

If you are wondering about the game’s return to player (RTP) percentage then you will find a decent percentage. The game’s RTP is fixed on 96/06% which is above the 95% industry average and which allows us to give it another plus.