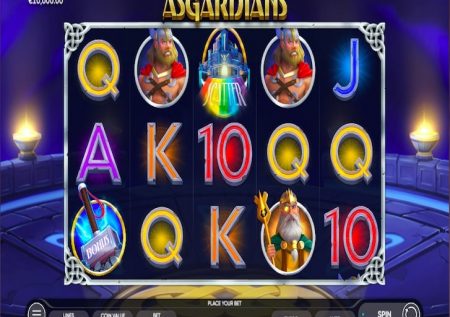 Asgardians is a 5-reel, 3-row with 25 lines slot game featuring Wild substitutions, free spins a pick bonus game and a Risk game. The game can be seamlessly played on any device including mobile and the game boasts a fixed RTP 96%. Themed around the world of legendary Asgard which is the home of Norse Gods and Godesses you will have the chance to meet these heroes.

Whilst spinning the reels you can land the symbol of Loki which acts as the game’s Wild symbol and which can substitute for other game symbols assisting you to form winning combinations.

You can also land trigger 10 free games if you land 3 or more Scatter symbols which are depicted by the rainbow bridge. But on top any winnings made during the free spins  are multiplied by x3 which can prove to be quite lucrative if have some luck.

If you are wondering if the game has to offer, then the short answer is definitely yes. Landing 3 or more Bonus symbols depicted by Thor’s legandary hammer Mjölnir you will trigger the game’s pick bonus game forge. Your task is to use the Mjölnir hammer to hit the shields which can bring you about colossal prizes.

If you are a risk taker then there is also more great news. The game gives you the chance to double your winnings up to 10 times by choosing a card from the four cards deal on the table. If you manage to bear the dealer’s card, your win is double and you can try again. But if you loose then you loose your winnings which you were attempting to double.

The game fits nicely on any device including your mobile as it the game is responsive. And the game’s buttons a perfectly sized and distanced so as to alow you a seamless gaming experience even from your mobile.

When it comes to the game’s return to player percentage the game offers you a decent rtp fixed at 96%. Given that the average RTP percentage is 95% and this is above that benchmark it is another plus in our opinion.